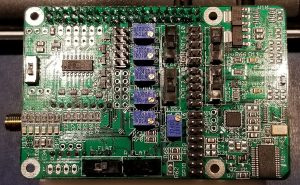 This has been in the works for some time and is a collaborative project between ORP and ICS. This is a hardware interface to turn a Raspberry Pi 2 0r 3 into a repeater controller. One of the stand out features of this board is that it has an integrated audio codec chip…so no more USB sound dongles. This interface is capable of working with different software packages. ICS has a functioning software IMG on their site that has a barebones SVXLink install (no GUI). This supports the sound chip as well as both ports. ORP has a beta/dev IMG that can be made available. As of this writing, it supports the sound chip, but only one port is supported currently. ORP has a little developing catchup to do to support both ports, but progress is being made.

ICS-CTRL.COM has been producing repeater controllers for many years, and now has released the first of its kind, a fully assembled, dual port controller system based on the Raspberry Pi (3) platform.

The OS:  The controller is platform independent, as all interfaces are based on GPIO and standard bus protocols like I2C, SPI, I2S.  While being platform independent by design, the designers are running SVXLINK which is the same software platform as OpenRepeater uses under the hood.

The HW:  This PI3 sized board is packed with features that are sure to be useful

You can find out more about the controllers, and the variety of accessories at their website:

For a 10% discount on the PI-REPEATER-2X controller or one of the kits, use coupon code “OPENREPEATER” before December 31st, 2017.